This site uses cookies to give you the best shopping experience. To dismiss this message and to continue using cookies please click ‘accept’. Otherwise to manage your cookies click here.
More Info
Agree
Home > Gabor Blog > Uncategorized > What is the Most Used ABBA Lyric?
Menu
Uncategorized

What is the Most Used ABBA Lyric?

No matter your generation or where you grew up, you know ABBA. The lyrics alone are iconic, their songs are played at practically every wedding and boy are they catchy. But which lyrics are the most prevalent? We analysed every single ABBA song ever released (yes, it took us a while) and tallied up the number of times each word was spoken to find the most used lyrics.

Can you guess which ones they said the most? 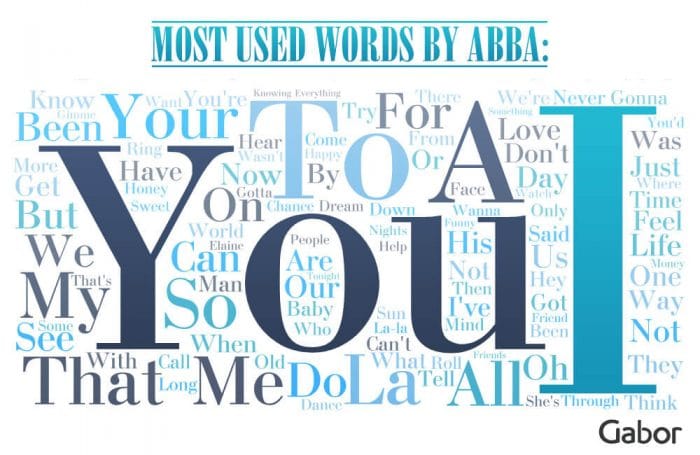 We’ll start with the obvious: the pronouns. ‘I’ and ‘you’ were of course the most common, but these do form the basis of the human language; no surprises there.

Then come the ‘pop’ words; those words we all expect to hear in all the great pop songs we hear in the charts. ABBA does not disappoint on this front, with the word ‘love’ being sung a whopping 154 times across all their records. This affectionate lot have also sprinkled their lyrics with lots more loved-up words including ‘baby’ (58 appearances), ‘honey’ (53) and ‘sweet’ (28). Perhaps it’s all this affection that makes the world so fond of ABBA? Perhaps we simply can’t help but return the love.

There are certain words that are associated almost exclusively with the ABBA brand, so of course we’ve looked at just how many times they crop up. ‘Dance’ – the activity that becomes obligatory whenever an ABBA song comes on at a wedding – appears an impressive 46 times throughout the band’s repertoire. ‘Gimme’ follows next with a respectable 30 mentions, closely followed by ‘Money’ (27 mentions) and ‘Voulez-Vous’ and ‘Waterloo’ share fourth most-spoken’ position at 21 mentions apiece. Bringing up the rear, but still with an impressive presence, is ‘Fernando’ with 18 mentions.

How Does ABBA Compare?

We couldn’t help but wonder how ABBA’s use of language differs to that of other chart music giants; so we had a little look. We chose to compare them with two extremes in terms of genre and culture; The Beatles and AC/DC. Due to the fact that some bands have released more records than others, we have calculated the following results based on percentage proportions rather than individual mentions.

Intrigued? You should be; some of the results were surprising.

For starters, it turns out that ABBA sings about ‘girls’ far more often than AD/DC do, with 0.26% of ABBA’s lyrics being centred around the female of the species, compared to AC/DC’s 0.18%. Surprised? We certainly were. Though perhaps less surprising is that The Beatles trumps both other bands on the ladies front, with 0.38% of their lyrics dedicated to this topic.

In a Dream State

ABBA sings about ‘dreams’ significantly more than either of the other two bands, with 0.30% of their songs dedicated to topics of dreaming, while AC/DC and The Beatles only sing about this in 0.02% and 0.08% of their lyrics respectively. To us this actually makes a great deal of sense. Have you ever listened really closely to ABBA’s lyrics? They’re certainly bizarre and dream-like in places, adding to their air of mystery and ethereal on-stage aesthetic.

Despite its generally loved-up and dream-like lyrics, ABBA has one more surprise for us when it comes to song topics. This cheerful band actually sings the words ‘die’ and ‘death’ proportionately more (0.07%) than rock band, AC/DC (0.01%). Who saw that coming? Though, once again, The Beatles take the lead on this gloomy topic with 0.12% of their lyrics dedicated to it.

Well, that was rather unexpected. It seems that there’s much more to ABBA lyrics than just dancing queens and love. If we listen more closely we hear mentions of much deeper and slightly more unexpected themes, but – let’s face it – they’re still everybody’s go-to band when a dance floor needs filling.

So we say thank you for the music. And, in case you were wondering, the words ‘Mamma Mia’ are spoken 11 times in that song. Is that more than you expected, or less?